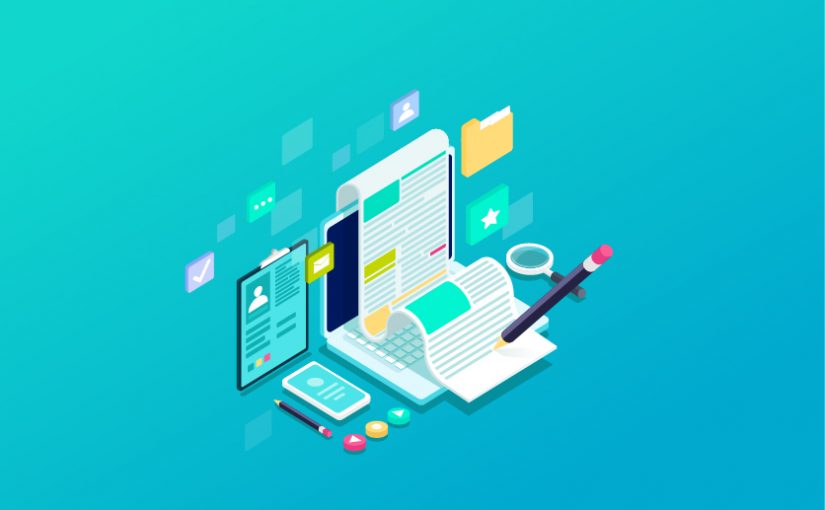 One of the main challenges of license management is the juggling act between carrying the minimum number of licenses to reduce costs while ensuring that your user base can work at maximum productivity with as few denials as possible. Here at OpenLM we believe that our standard reporting supplies all the information you need to keep your license pool lean and mean.

Most of our customers buy OpenLM because the license management software provided by the vendor, such as Autodesk, reports on licenses that are checked out of the network pool. What is not reported on is the efficiency with which these licenses are being used, in other words, how productive are the users? Customers say to us that they know intuitively that their license usage is not optimal, but that they have no way of confirming this with the vendor’s license management software.

So, when an organization acquires OpenLM, they usually start off by monitoring license usage and whether there are surplus licenses. They can now identify idle licenses, that is licenses that have been booked out, but are not being used. These licenses can now be freed up for other users by “harvesting” them, suspending the user’s session and putting the license back in the pool.

One of the ironies of license management for engineering software is that the IT business unit has to budget for the software licenses but does not actually use the software. With our software, it is possible to identify license usage by group or department and charge the costs back to where the software is actually being used. This usually results in further cost savings, because the manager of that group or department will be making sure that his users are economical when they book out licenses, because he is responsible for those costs.

However, it is not just about reducing costs: there comes a time when more licenses are needed. Early warning signs include:-

While our standard reporting provides useful input for the decision to acquire more licenses, we felt that there was place for a report to help decide whether new licenses are needed and how many. This new report has been added to our Reporting Hub extension. 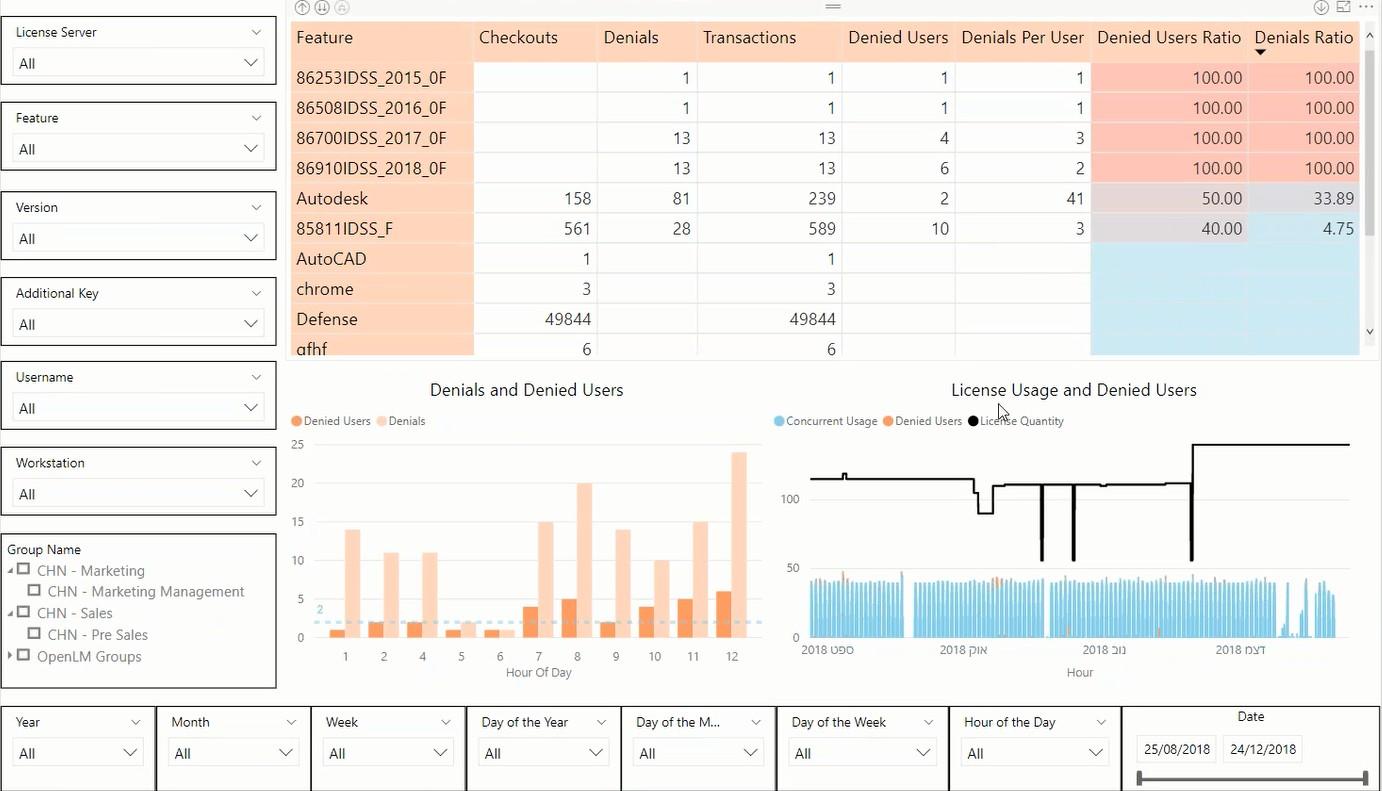 Our new addition to the Reporting Hub

There are 3 sections to this report and you can select a wide range of filters to get different views. Along the bottom of the screen are time dimensions and to the left of the screen are software, user and workstation parameters. The reporting is granular down to software feature level, which is especially useful where additional license costs for advanced features are part of the license agreement. Let’s look at the report content. 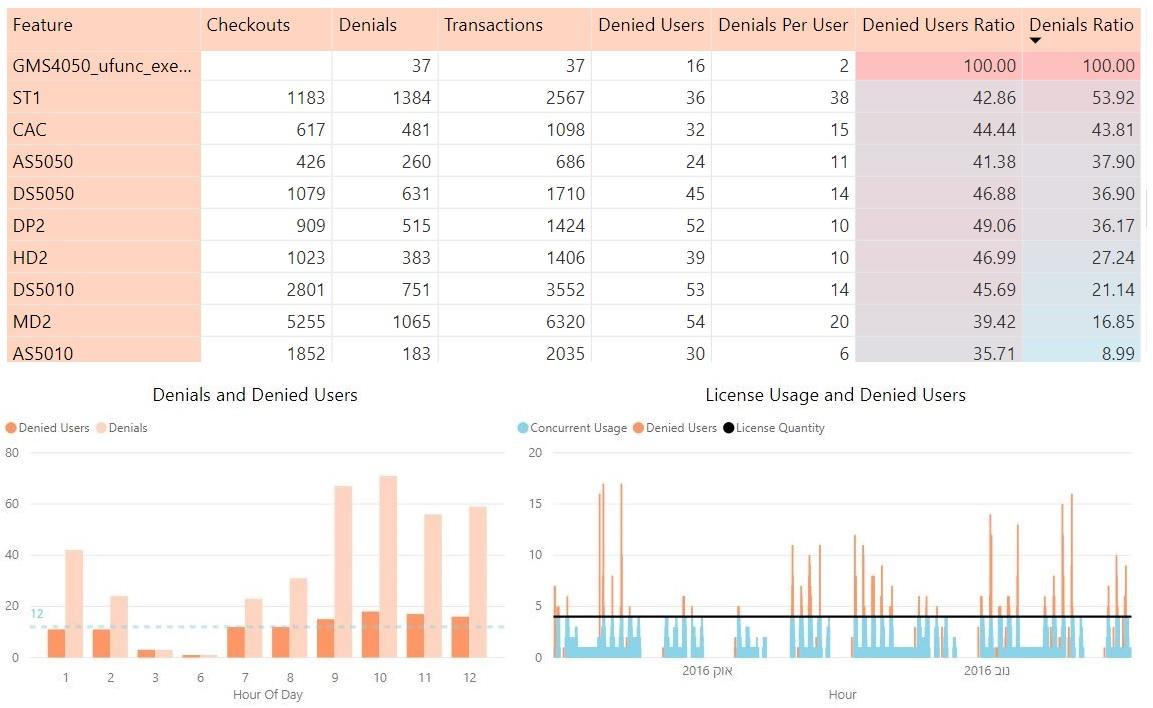 The report at the top of the screen gives statistics on each feature of the application, how often the feature was checked out and how many denials were encountered. It then analyses the denials and provides two denials ratios, the number of users denied and the number of denials. The features are ranked by the denials ratio in descending order. You will see that the feature at the top, “GMS4050_ufunc_exe” was never checked out, as every attempt was denied. This would be typical of a feature that was not purchased under the license agreement or a specialized feature that is only accessible by a select few users. 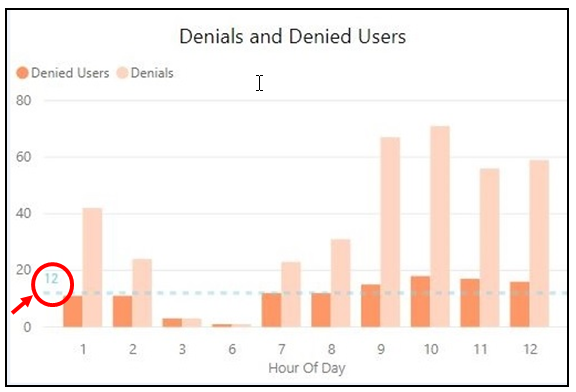 We can already see from the ratios that the comfort zone for this license pool has been exceeded and that more licenses are needed. If we look at the graph at the bottom left-hand side, it shows us that the rate of denials is very high and that users are experiencing multiple denials, because the number of denials is up to 4 times the number of users. The value of “12” on the left-hand  side of the report is the number of additional licenses required to get a better balance of supply and demand. There will still be some denials, but there will be a reduction of 80%, which gets us back to an acceptable ratio. 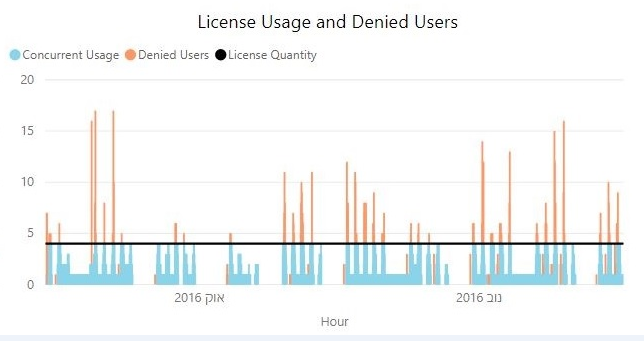 The graph at the right hand side confirms our first impression. You can see that the concurrent usage high water mark often meets the number of licenses in the pool and this is when denials start occurring during the day. It is definitely time to start considering more licenses. What is nice about this report is that it is a clear demonstration of why more licenses are needed

Please contact us if you want to know more about the Reporting Hub or any of our other software products.