OpenLM Version 1.6 – What is new in details

Version 1.6 of OpenLM is a major release with overall improvements in many aspects of the software. This document provides an overview of the new and improved functionality of in OpenLM software.

Support for different sample intervals for each license server 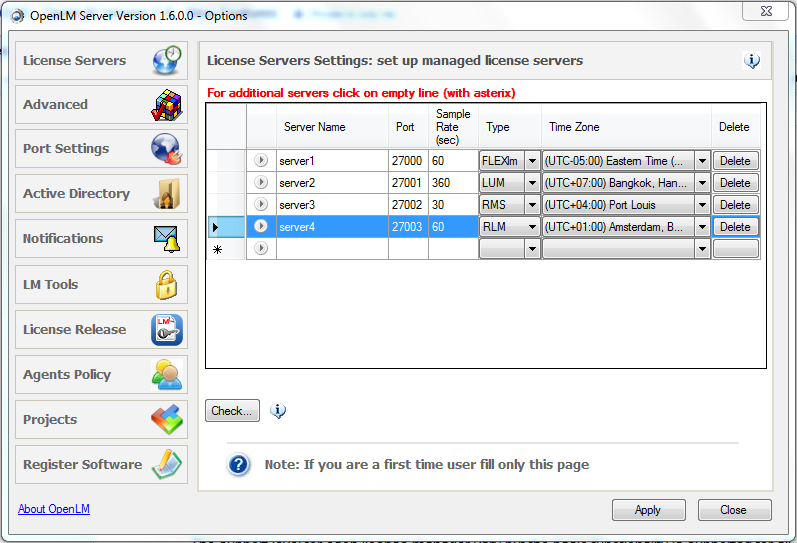 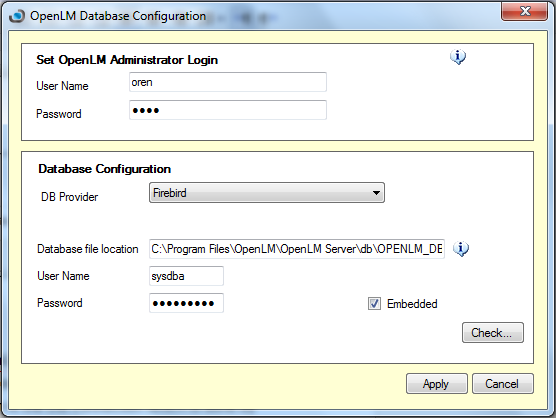 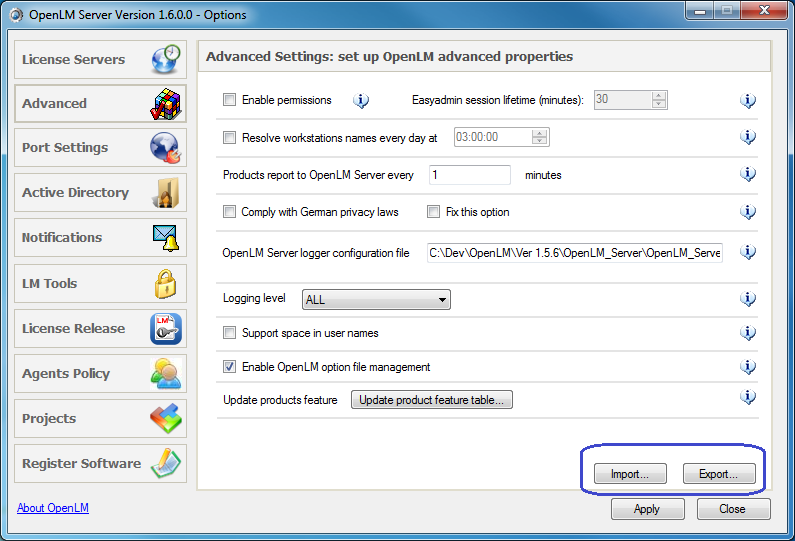 Integrated authorization and role based security was added to OpenLM

A new extension to OpenLM Software now adds the following functionality:
Authorization –  Users logging into EasyAdmin need to provide a username and password.
Role based permissions – A specific set of permissions can be assigned to roles.

The new functionality allows organization to grant different access levels  to OpenLM EasyAdmin, according to the user role. For example, a dedicated role can be created to helpdesk users. Helpdesk users will be able to access limited functionality that will allow them to assist floating license users.

The new extension allows the creation of very granular set of permission for each role. The permission starts at the level of logging, tabs, and all the way to fields and buttons.

Access permissions can also be granted to specific license managers. This way, limited access can be granted to local system managers or to power users. 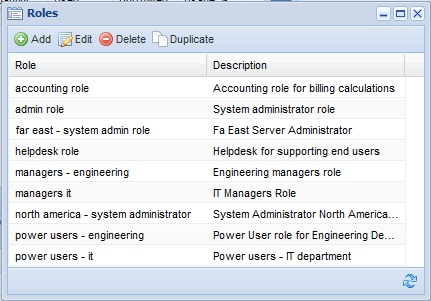 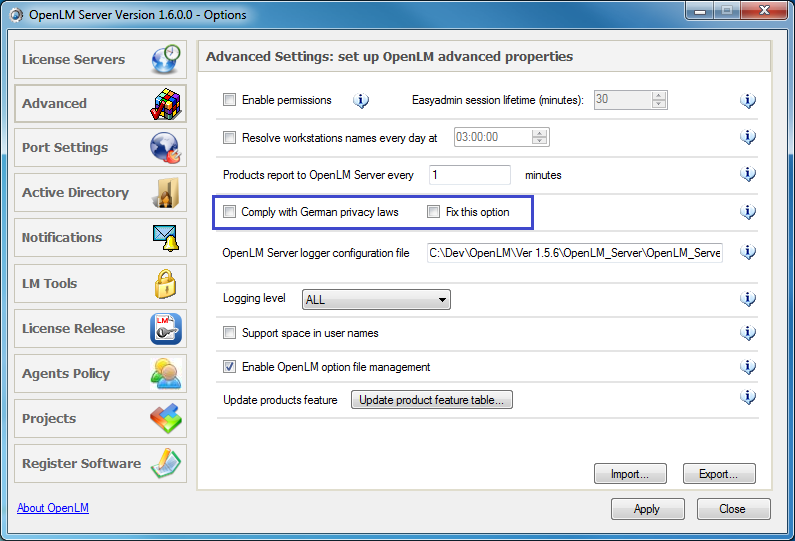 Support for usernames with spaces

OpenLM now supports usernames with spaces, for example: “Jack Smith”. This is not a common methodology to use spaces in usernames but it’s supported by Microsoft.

Note: This option works only when Active directory synchronization is enabled. 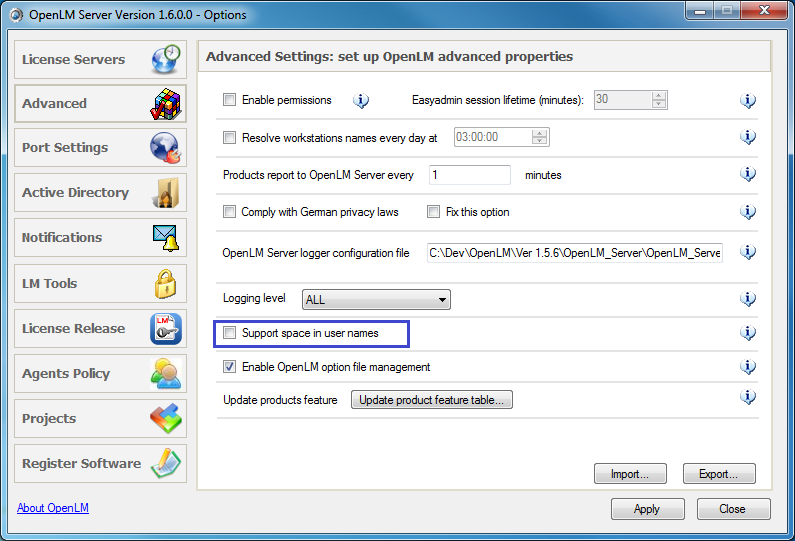 OpenLM now allows users to edit their FLEXlm option file interface directly from OpenLM EasyAdmin interface. This revolutionary functionality creates integration between OpenLM and Active Directory (LDAP). Users can synchronize groups of users with Active Directory, set the desired limits in EasyAdmin and save the changes to their FLEXlm option file. All this can be done without accessing the server and without editing a single line in the option file.

FLEXlm users that maintained OpenLM in the past know what a tedious task it is to maintain such a file. OpenLM now provides a menu driven interface that can save organizations expensive work hours and a better usage of the available options.

OpenLM is now able to synchronize Users and Groups with multiple domains. This provides better support for international organizations and complex LDAP forests. 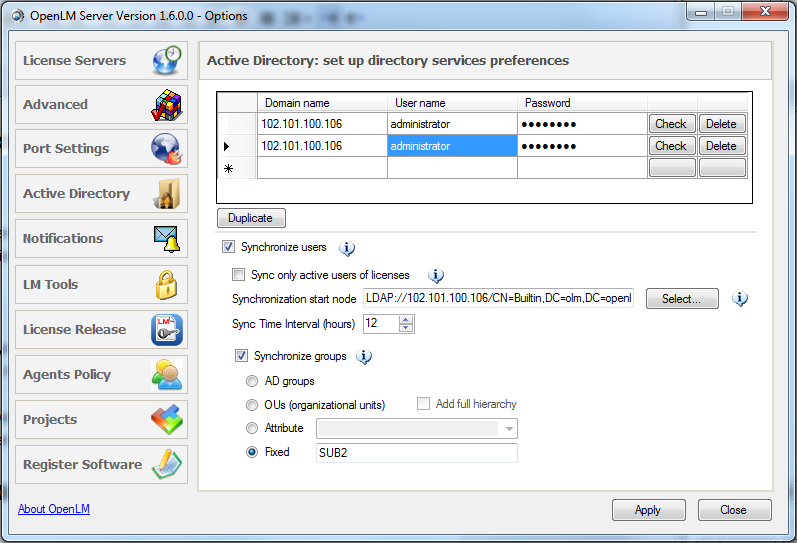 We have also added the ability to limit synchronized users to the ones that use licenses. This important for large organization that has many users listed in AD.

Another group synchronization method was added, “Fixed”. This method is very useful for organizations with large AD forests (International companies with subsidiaries, for example).

The synchronization process between OpenLM and Active Directory (LDAP) is much more effective. It now supports huge domains that keeps a 6 digits number of objects.

Controlling the frequency of notification from OpenLM Server

OpenLM Server now allows system administrators to limit the number of alerts they get when new version of OpenLM are available.

The user can now select one of these options: Once, Twice or Weekly frequency. 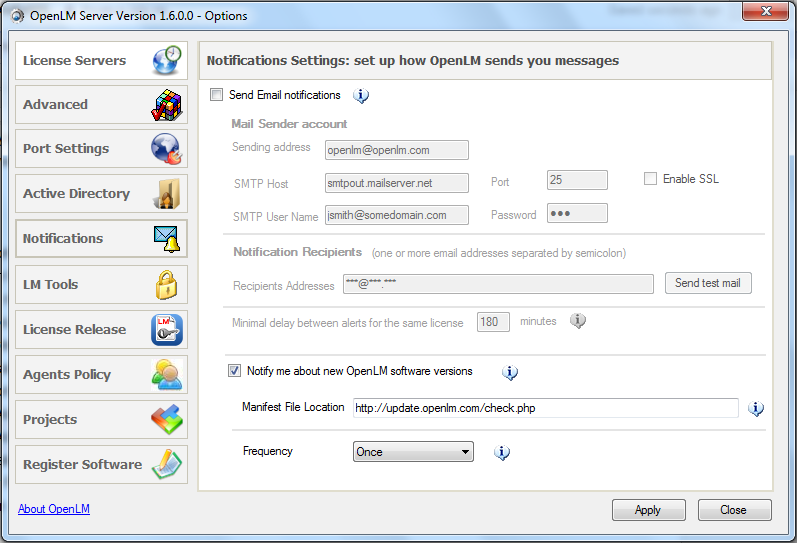 An enhanced menu for the configuration of license manager tools

OpenLM now provides and enhanced and easy to use configuration menu for license managers tools and settings. 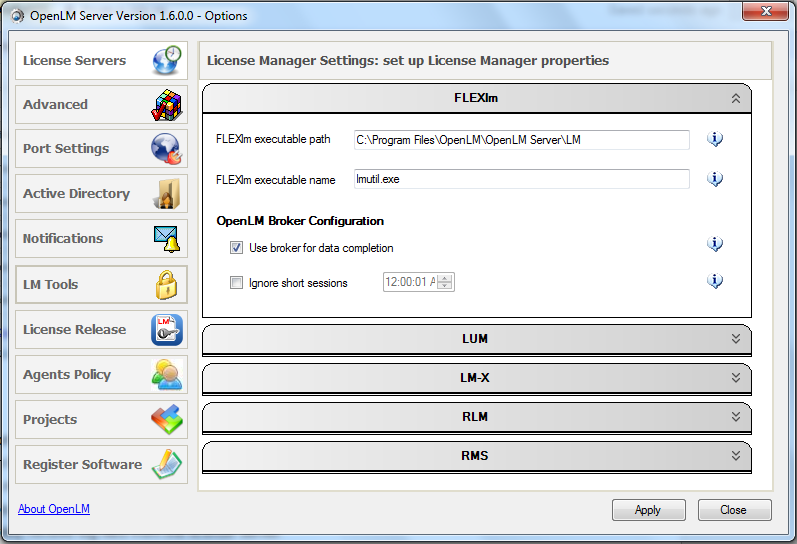 Until version 1.6 the management of Users, Groups and Projects was done by using OpenLM Users Management software. In version 1.6 we moved this functionality to OpenLM EasyAdmin.

EasyAdmin interface is faster and integrated with the main interface that OpenLM provides.

Many additional conditions were added to OpenLM Alerts

OpenLM Alert is an extension to OpenLM that was first  declared in version 1.5.4 of OpenLM. This module allows system administrators to define conditions and receive notification when these conditions are met.

For example, one can define a condition that checks if license usage rate is above a certain threshold. The notification can be written to OpenLM EasyAdmin Alerts window, email addresses, mobile phones by SMS or to the server event log.

Sending times of the alert can be limited by date and time using a sophisticated but friendly configuration tool.

The conditions available in version 1.6 of OpenLM Alerts:

Quick charts tool was added to license denial tab. It allows the user to immediately generate charts, using the license denial information. The module supports any of the columns and three types of charts: line, bar or column. 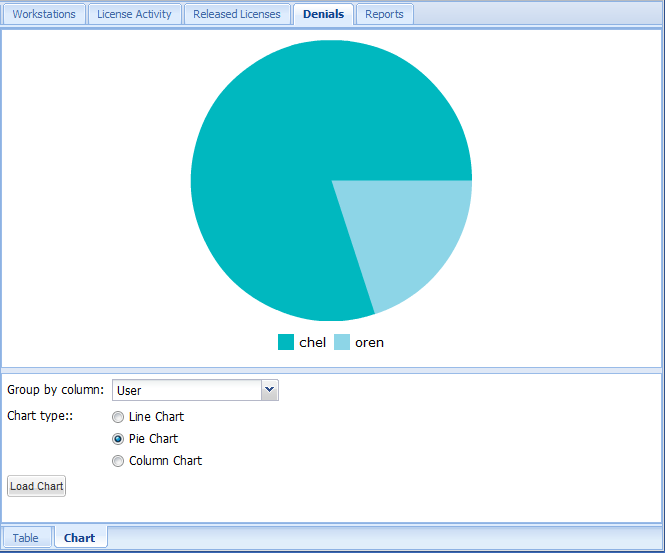 In older versions of OpenLM packages and products name were managed in XML files. End users were able to edit these files in order to add packages or new products. Version 1.6 of OpenLM features a new menu driven interface integrated into OpenLM EasyAdmin ->Control Panel tab.

OpenLM now integrates detailed user information. The first name and last name columns can be added to most tabs.

EasyAdmin users can also click the user name and get additional user information: 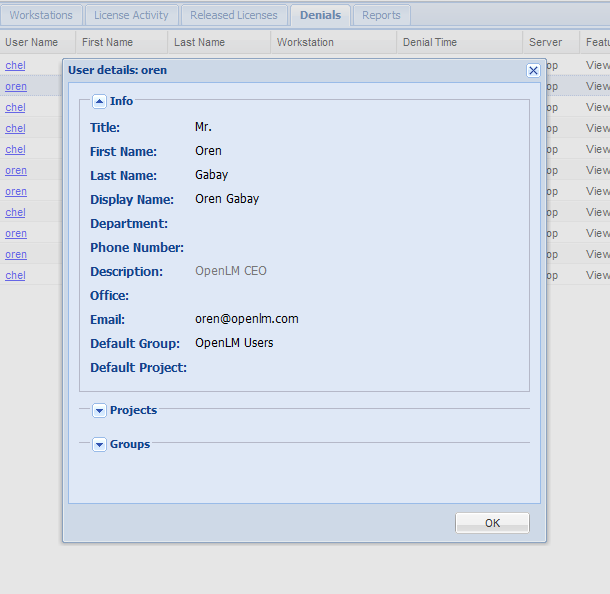 Better Performance and improvements in EasyAdmin

OpenLM server has undergone through a major performance tuning process. New algorithms were implemented and every DB query was tuned. The result is a very significant improvement in EasyAdmin performance. Many more license servers can be monitored while lowering the load on the server.

OpenLM Broker is component we recommend to install on each monitored server. In older versions its functionality was limited to reading the FLEXlm debug log files and to sending usage information to OpenLM Server.

In version 1.6 OpenLM Broker is closely integrated into OpenLM Server and provides a wide range of services to the system.

OpenLM Broker is a Java software, and as such, it can run on any platform running a supported license manager (Windows, Linux, UNIX or MAC OS). Previous version also required .NET Framework for the installation stage. This version is fully implemented using Java, including the software installer.

The setup of the the new version is easier. It also features an automatic license recognition system that saves administration time.

A graphical redesign of the software

The software also features a new design and graphics. New 3D icons are integrated and the software forms look better. 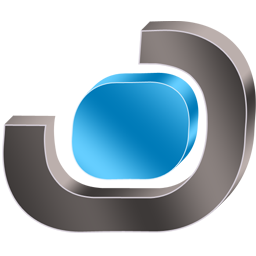 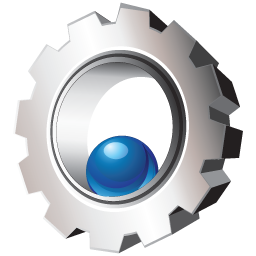 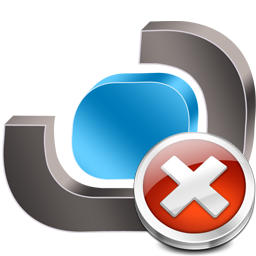 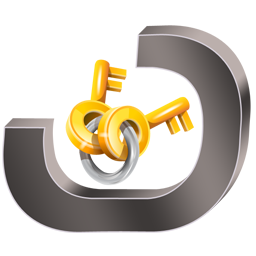 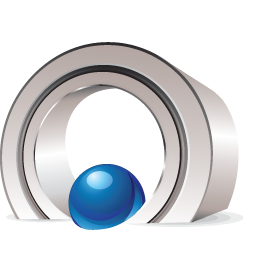 OpenLM License Usage Information window now supports sorting according to each of the grid columns. The information can be sorted by each of the column. 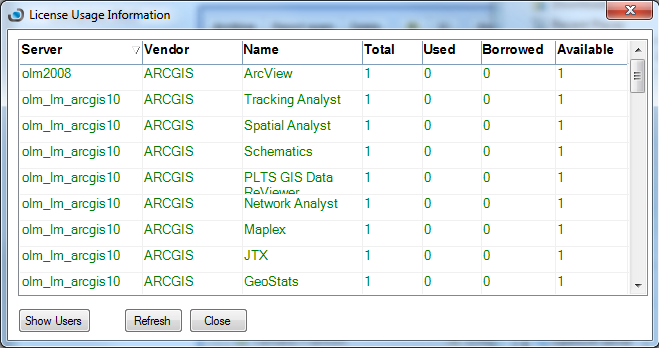 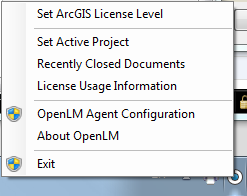 All OpenLM software files are digitally signed by Comodo. This provides a better security when implementing OpenLM Software in organizations. 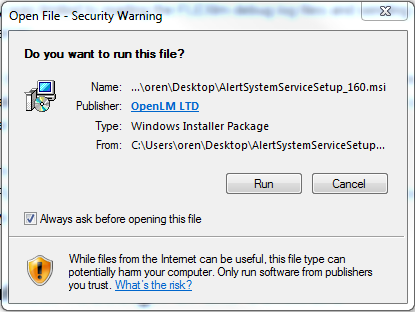 The new Feature Usage Status window allows system administrator to select a set of important features and monitor them. The new window provides a quick view for the selected features with links to charts for immediate charting.

Previous versions of OpenLM provided this functionality to ESRI ArcGIS Desktop products such as ArcInfo, AecEditor and ArcView. The implementation of OpenLM timeout functionality in ESRI sites provided at least 40% more usage from same amount of licenses, a very significant saving.

This functionality is now available to organizations using Autodesk software. 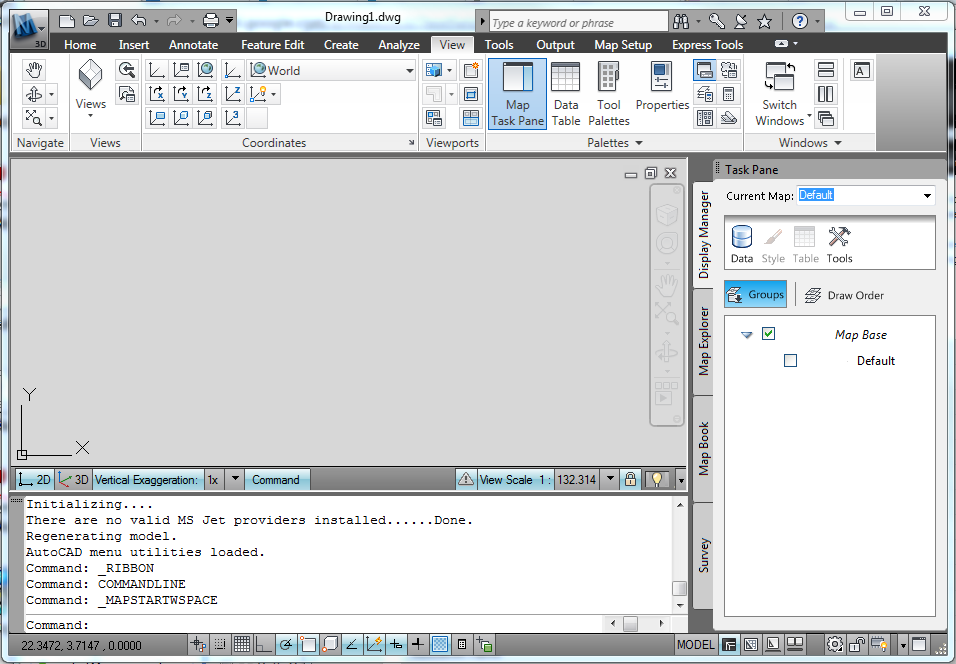